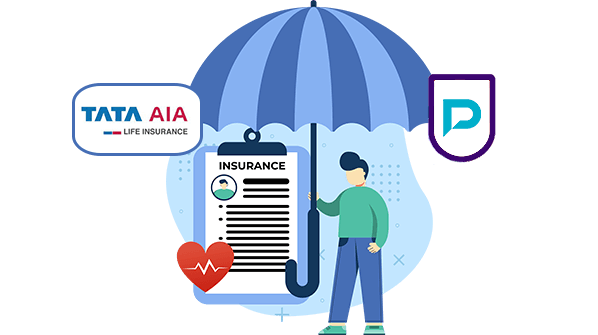 Tata AIA Life Insurance Value Income Plan is an individual, non-linked, participating life insurance savings plan that gives you the choice between receiving cash bonuses, if declared payout each year on the policy anniversary or on your birthday following the second policy anniversary to take care of your financial commitments, or building a larger corpus if declared at a company declared interest rate, to create a stress-free lifestyle.

Tata AIA Life Insurance Value Income Plan offers you two practical options for saving, as well as the benefit of an extended life cover that lasts up to 100 years of age, depending on your preferences.

Here is the list of the features and benefits of the Tata AIA Value Income Plan.

The savings policy aids you in consistently setting aside funds so you can build up a financial corpus at maturity and satisfy all of your future financial obligations. A savings strategy like this aids in safeguarding the aspirations and objectives of your family so they can live carefree lives.

A Grace Period of 15 days for monthly modes and 30 days for all other modes will be provided if you are unable to pay your Premium before the premium due date. Your policy is regarded as being in effect during this time, providing risk coverage in accordance with its terms and conditions.

Policyholders may request for a policy loan for an amount up to 80% of the surrender value, provided that the policy gains surrender value. Tata AIA Life must be given ownership of the Policy.

If a premium is past due after the Grace Period and the policy hasn’t been surrendered, it may be revived within twenty years of the first unpaid premium’s due date and before the date of maturity, provided that I the policyholder submit a written request for revival; (ii) the insured produces a current health certificate and other acceptable proof of insurability; and (iii) all past due premiums are paid in full, plus interest.

The policyholder has 15 days from the date of delivery of the policy paper to evaluate the terms and conditions of the policy, and they have 30 days if they purchased the policy electronically or remotely. The option to return the policy for cancellation exists if the policyholder objects to any of those terms or conditions. In this case, the policyholder will be entitled to a refund of the premiums paid without interest, less the proportionate risk premium, stamp duty, the cost of the medical examination, and any applicable taxes and cesses or levies, if any.

Subject to meeting the requirements outlined in the applicable Income Tax Laws, tax benefits may be made available. No tax implications described in this material are taken on by Tata AIA Life Insurance.

How Does The Tata AIA Value Income Plan Work?

40-year-old Vivek Mukherjee works as a teacher. He purchases the Endowment option of the Tata AIA Life Insurance Value Income Plan. The candidate is his wife. The following are the policy’s specifics:

1. Is the base policy's sum assured paid out in addition to the rider benefit?

No, according to the terms and circumstances of the rider, the rider benefit is only paid out if the incidents or casualties covered by the rider occur.

2. What occurs if the plan's Grace Period has passed and the policy premiums are paid?

The policy will expire or be changed to a lower paid-up policy in accordance with the terms and circumstances of the policy if the premiums are not paid before the end of the grace period. The insurance can be revived, allowing you to continue receiving coverage if you pay the premiums plus interest after the grace period within 5 years of the initial missed premium.

3. When can the Cash Bonus be received?

At the time of purchase, the policyholder has the option of accepting cash bonuses that are announced annually on policy anniversaries or on the birthday that follows the second policy anniversary.

If the policyholder decides to accept the cash bonus and it is announced on their birthday: